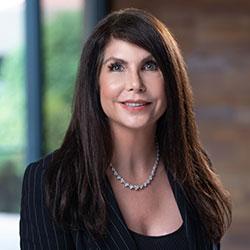 Kelly Brockman is vice president, business banking, for Bank of Nevada, where she works with small-to-medium sized businesses in gaming, healthcare, real estate and more. Based in the Siena Heights office in Henderson, she joined Bank of Nevada in 2017 and has over 30 years of banking industry experience.

Ms. Brockman has been named among the Distinguished Women of Southern Nevada, and was honored with a “40 under 40” award from Vegas Inc. She was a member of the inaugural 2001 Class of Leadership Henderson, served as the Leadership Steering Chair and has been an alumni for over 20 years.

Active in the community, Ms. Brockman participates with the Henderson Chamber, the Friends of the North Las Vegas Library Board, the UNLV Community Health Sciences Board and the American Cancer Society Leadership Board and Construction vs. Cancer Committee and the board of Living Grace Homes and Adams Place. She has served in different capacities for the Southern Highlands Charitable Foundation’s Governor's Black Tie Planning Committee, Women's Development Center and the National Charity League Henderson Chapter and the Henderson Foundation Board.