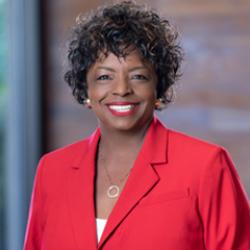 Jerrie E. Merritt is senior vice president, community development at Bank of Nevada. Her banking career spans 40 years, allowing her to work with a diverse group of business clients and community and nonprofit groups whose goals are to improve the local community.

Jerrie’s responsibilities include coordinating all community development initiatives and working as an intermediary with state and local agencies and other groups involved in the community and economic development programs and projects. Merritt aims to create and expand existing client relationships and build strong community partnerships.

She has received recognition for her performance, skillful leadership and exceptional contributions to the financial arena. A solid champion of education, Jerrie served on the UNLV Libraries Advisory board and the Communities in Schools board of directors and also volunteered as a student mentor with the Clark County School District.

Her past leadership positions include board presidencies of the Rape Crisis Center and Urban Financial Services Coalition. She was also board chair of HELP of Southern Nevada and the Urban Chamber of Commerce. Jerrie is passionately involved with many other philanthropic and civic organizations.

In 2021, Merritt received the Trailblazer Award presented by the National Coalition of 100 Black Women - Las Vegas Chapter. Her previous recognitions include a Women of Distinction Award from the National Association of Women Business Owners - Southern Nevada (NAWBO). She was also recognized as an Interesting Personality in Who’s Who In Black Las Vegas™️ and honored with a Women to Watch Award from Vegas INC. Merritt was included in the My Vegas Magazine’s Top 100 Women of Influence and received the Silver State Award for Female Executive of the Year.

Jerrie has been married for 50 years and has one son.