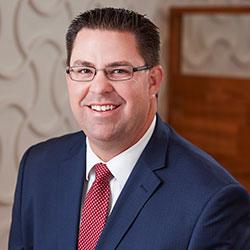 Dan Wright is director, commercial banking, for Bank of Nevada. Located in Mesquite, he serves business and municipal clients throughout the region, including the Moapa Valley, Northwestern Arizona and Southern Utah. A banker for more than 16 years, Mr. Wright brings clients a wide range of small business loans, with particular attention to SBA 504 and 7a financing, and deposit and treasury management services.

Currently, Mr. Wright serves as chairman of the board for Mesquite Regional Economic Development, the official economic development agency of the Mesquite region, and is treasurer of the Mesquite Community Education Foundation. Past community affiliations include roles with Mesa View Regional Hospital and the Mesquite Chamber of Commerce.

Mr. Wright earned a bachelor’s degree in Finance at Southern Utah University, where he was an All-Conference baseball player. Mr. Wright was an All-American baseball player at Dixie State University and was also a member of the 2000 Nebraska Cornhusker Big 12 Championship team. He was drafted by the Atlanta Braves in 1997. Mr. Wright remains a committed baseball fan, and currently is the president of Virgin Valley Little League in Mesquite. He also serves as the head varsity coach for the Virgin Valley High School, and led them to the 3A Nevada State Championship in 2022.