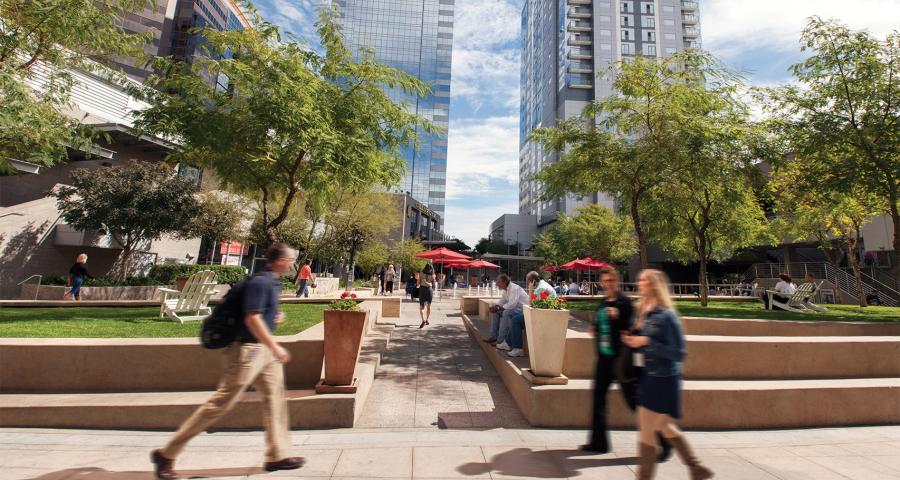 Phoenix-based RED Development stepped up to a company-defining challenge in 2005 when it entered discussions with the City of Phoenix about a project in the empty, distressed core of the city’s emerging new downtown. Framed by two, high-gloss professional sports venues – Chase Field for the Diamondbacks and what is now Talking Stick Resort Arena for the Suns – as well as the convention center, ASU’s 15,000-student downtown campus and more, were two surface lots and an ill-used public park filled with dead trees.

RED purchased the central land parcel and also won the bid to redevelop the park – the first moves in creating CityScape – an exceptionally dynamic, 1.2 million square-foot, mixed-use office, hotel and retail property that opened its first phase in 2010. Today, the sleek and inviting CityScape has more than delivered on its promise of new energy for this city’s commercial heart.

For this visionary project, RED Development sought out visionary financing resources, including Western Alliance – which liked the project so much, it moved its corporate headquarters to the CityScape office tower.

“One of the things that makes Western Alliance unique is they spend extra time to understand a company and its priorities and what they can uniquely assist with,” says RED Development Managing partner Mike Ebert. “The way we view Alliance is that we have a high level of confidence that they will deliver on what they promise and they have a greater level of real estate knowledge. There also is a huge trust factor there.”

Since the dramatic success of CityScape, RED Development has moved forward on a number of exciting new ventures, including a high-profile mixed-use development now under construction in fast-growing Uptown Dallas called The Union Dallas.

The company’s productive relationship with Western Alliance endures. “Already this is a long-term relationship and we see this as a lasting relationship. We’ve been together for seven years and we think this relationship will last for the rest of our professional careers,” adds RED Development Managing Partner Scott Rehorn.